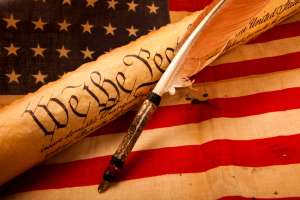 I am passionate about the work of our nation’s founders.  I believe that the role of a legislator is to protect the rights of the governed.  Frederic Bastiat in his classic treatise “The Law” said:

“We hold these truths to be self-evident, that all men are created equal, that they are endowed by their Creator with certain unalienable Rights, that among these are Life, Liberty and the pursuit of Happiness.–That to secure these rights, Governments are instituted among Men, deriving their just powers from the consent of the governed.”  These are not empty words but set up the most important institution in history.  We need to protect these God given rights and they should be a guide to ponder in representing those that elect us to office. Bastiat goes on to say

“Which countries contain the most peaceful, the most moral, and the happiest people? Those people are found in the countries where the law least interferes with private affairs; where government is least felt; where the individual has the greatest scope, and free opinion the greatest influence; where administrative powers are fewest and simplest; where taxes are lightest and most nearly equal, and popular discontent the least excited and the least justifiable; where individuals and groups most actively assume their responsibilities, and, consequently, where the morals of admittedly imperfect human beings are constantly improving; where trade, assemblies, and associations are the least restricted; where labor, capital, and populations suffer the fewest forced displacements; where mankind most nearly follows its own natural inclinations; where the inventions of men are most nearly in harmony with the laws of God; in short, the happiest, most moral, and most peaceful people are those who most nearly follow this principle: Although mankind is not perfect, still, all hope rests upon the free and voluntary actions of persons within the limits of right; law or force is to be used for nothing except the administration of universal justice.”

These rights, are not granted by the Declaration of Independence. Our rights do not depend upon government. They are the gifts of God. “Life, liberty, and the pursuit of happiness as ideas derive from natural law and are endowments from our creator.” Ideals that seem to be antiquated concepts.

Liberty, represents freedom from arbitrary or despotic ( Despotic is the adjective form of the noun despot, which means “tyrannical ruler.” If you live under despotic rule, you probably have few rights and may fear your government.) government or control. Friedrich August von Hayek said

“If we wish to preserve a free society, it is essential that we recognize that the desirability of a particular object is not sufficient justification for the use of coercion.”

“Liberty cannot be established without morality, nor morality without faith.”

“I predict future happiness for Americans, if they can prevent the government from wasting the labors of the people under the pretense of taking care of them.”

The pursuit of happiness, some believe a phrase borrowed from John Locke and it sort of means “do what thou wilt” within constraint of social mores. Jefferson declared himself an Epicurean during his lifetime: this is a philosophical doctrine that teaches the pursuit of happiness and proposes autarchy, which translates as self-rule, self-sufficiency or freedom.  Epicurus taught

“When we say, then, that pleasure is the end and the aim, we do not mean the pleasures of the prodigal or the pleasures of sensuality, as we are understood to do through ignorance, prejudice, or willful misrepresentation. By pleasure we mean the absence of pain in the body and trouble in the soul. It is not an unbroken succession of drinking bouts and of revelry, not sexual lust, not the enjoyment of fish and other delicacies of a luxurious table, that produces a pleasant life. It is rather sober reasoning, searching out the grounds of choice and avoidance, and banishing those beliefs that lead to the tumult of the soul.”

Epicurus in his letter to Menoeceus

“Justice Anthony Kennedy explained this often forgotten sense of happiness in his 2005 lecture at the National Conference on Citizenship. Kennedy notes that while in modern times there is a “hedonistic component” to the definition of happiness, for the framers of the Declaration of Independence “happiness meant that feeling of self-worth and dignity you acquire by contributing to your community and to its civic life.” In the context of the Declaration of Independence, happiness was about an individual’s contribution to society rather than pursuits of self-gratification. “

“. . . men who are possessed by the passion for physical gratification generally find out that the turmoil of freedom disturbs their welfare before they discover how freedom itself serves to promote it.”

Many people today appear to believe that “the pursuit of Happiness” has to do with a person’s emotional state. Not true. To the colonists, happiness was not to be equated with hedonism. For them, happiness was the freedom to use their time, talent, and resources to live a life that they believed would bring them the most satisfaction, and would benefit their family, friends, fellow man, and future generations the most.

The meaning of “the pursuit of Happiness” remains the same today. I believe virtue is a good word.

“And so, my fellow Americans: ask not what your country can do for you–ask what you can do for your country.
My fellow citizens of the world: ask not what America will do for you, but what together we can do for the freedom of man.
Finally, whether you are citizens of America or citizens of the world, ask of us here the same high standards of strength and sacrifice which we ask of you. With a good conscience our only sure reward, with history the final judge of our deeds, let us go forth to lead the land we love, asking His blessing and His help, but knowing that here on earth God’s work must truly be our own.”

… A troubled and afflicted mankind looks to us, pleading for us to keep our rendezvous with destiny; that we will uphold the principles of self-reliance, self-discipline, morality, and, above all, responsible liberty for every individual that we will become that shining city on a hill.”

I think the quotes above explain many of my deeply held beliefs about government.  They will continue to provide the foundation in the way I perceive the role of government.  I believe the Secretary Of Agriculture under Dwight D. Eisenhower Ezra Taft Benson made one of the best speeches I have heard on the proper role of government.

One of the very best treatises on the role of government is “The Law” by Frederic Bastiat.  I encourage anyone that believes in a limited government as envisioned by our founders should read and study it.