We claim freedom of religion for every citizen and expect the protection of government in securing to us this unalienable right. We affirm the right to religious expression, including prayer, in both private and public. 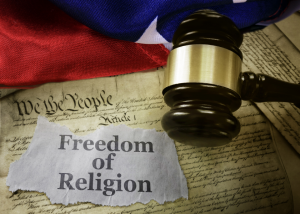 I believe in religious liberty.  The wall of separation Jefferson spoke of was not to keep religions people out of government, rather to keep government out of religion.  I affirm the freedom of religion and association for every citizen and expect the protection of government in securing to all of us this unalienable right no matter our personal beliefs. In his final address Washington said

Of all the dispositions and habits which lead to political prosperity, religion and morality are indispensable supports. In vain would that man claim the tribute of Patriotism who should labor to subvert these great Pillars of human happiness -these firmest props of the duties of Men and citizens. The mere Politician, equally with the pious man, ought to respect and to cherish them. A volume could not trace all their connections with private and public felicity. Let it simply be asked, where is the security for property, for reputation, for life, if the sense of religious obligation desert the oaths which are the instruments of investigation in Courts of Justice? And let us with caution indulge the supposition that morality can be maintained without religion. Whatever may be conceded to the influence of refined education on minds of peculiar structure, reason and experience both forbid us to expect that National morality can prevail in exclusion of religious principle. ‘Tis substantially true that virtue or morality is a necessary spring of popular government. The rule indeed extends with more or less force to every species of free Government. Who that is a sincere friend to it can look with indifference upon attempts to shake the foundation of the fabric? [and] …Can it be that Providence has not connected the permanent felicity of a Nation with its virtue?