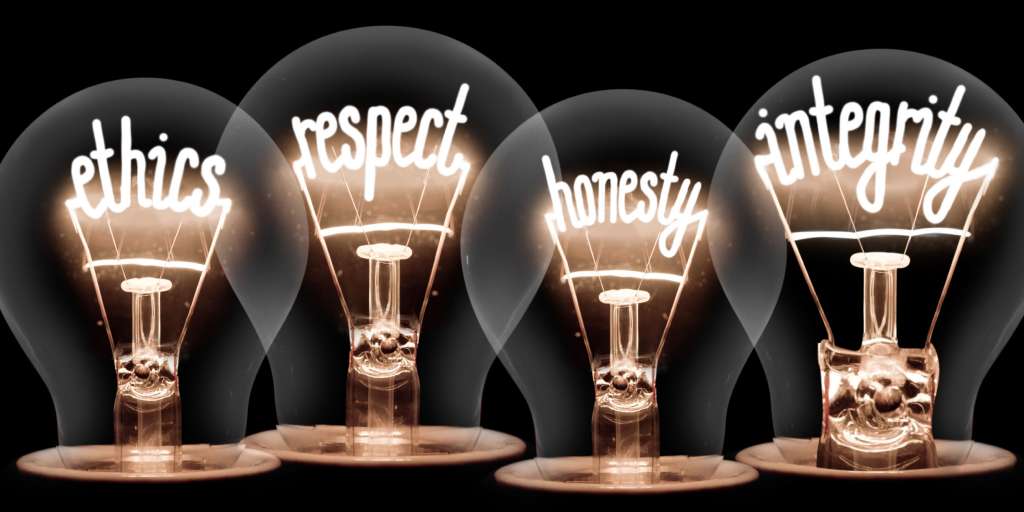 Integrity and Honesty Do Matter

How would you feel if a candidate's campaign made up a fake Political Action Committee (PAC) - such as ‘Utah Teachers Union’ or ‘Utah Election Integrity’ - to endorse themselves in the final days of an election cycle? Well, that’s exactly what Johnny Ferry’s campaign did. 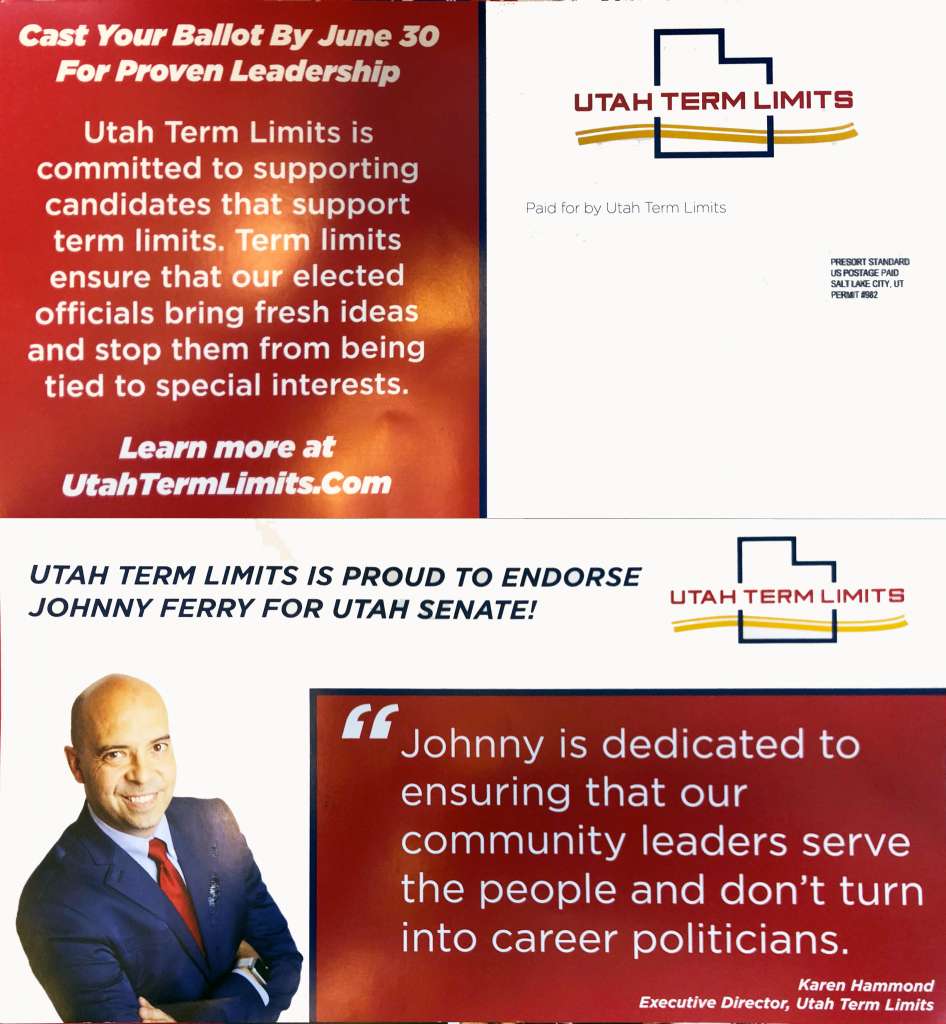 Less than two weeks ago his campaign created the Utah Term Limits PAC to endorse himself and mislead voters into thinking he was supported by a local group that opposes lifetime politicians. You can’t make this stuff up. All of this after Ferry has demanded “integrity and honesty” from candidates.

When Johnny Ferry chose not to sign U.S. Term Limits’s pledge to support Congress term limits they began sending mailers supporting John Johnson and against Mr. Ferry.  You will notice that these mailers are sent by U.S. Term Limits.  Johnson did not ask for them to be sent nor has his campaign been allowed any input into their creation or distribution.  Johnny chose not to support US Term Limits or sign the term limits pledge.

Example Mailer's (no connection at all with my campaign)* 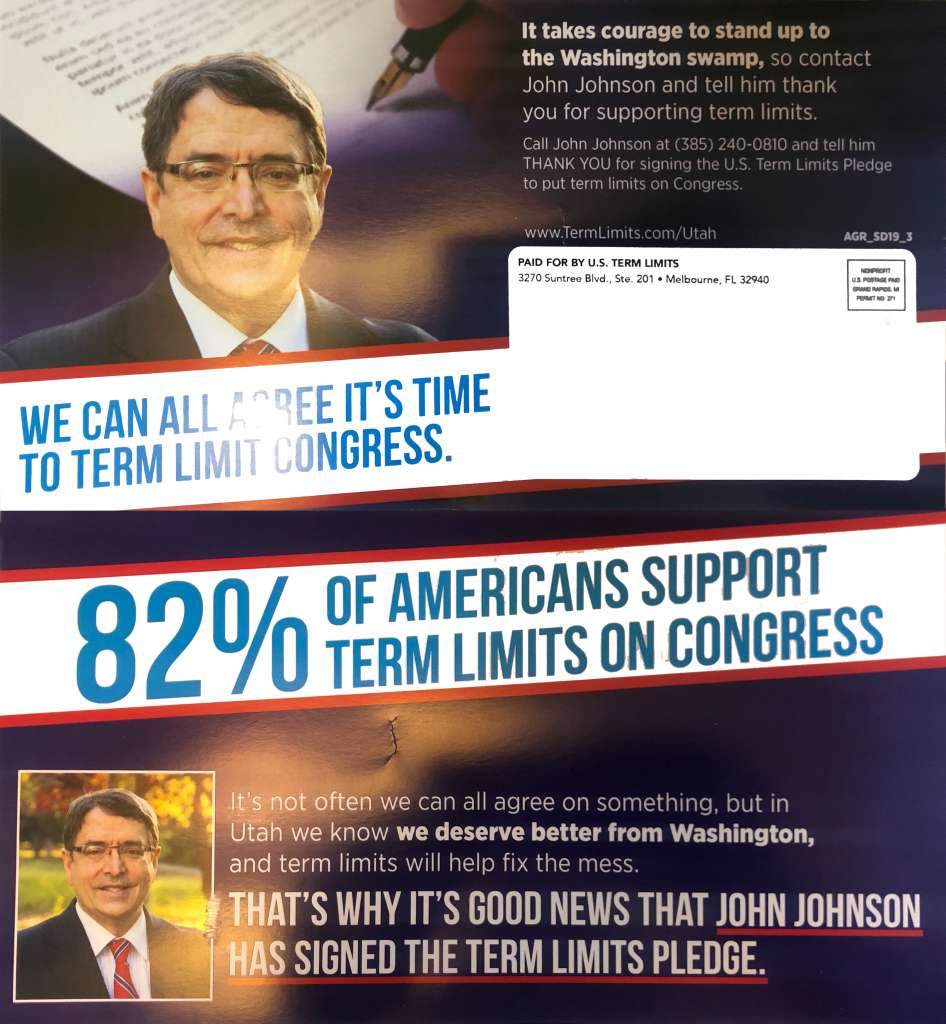 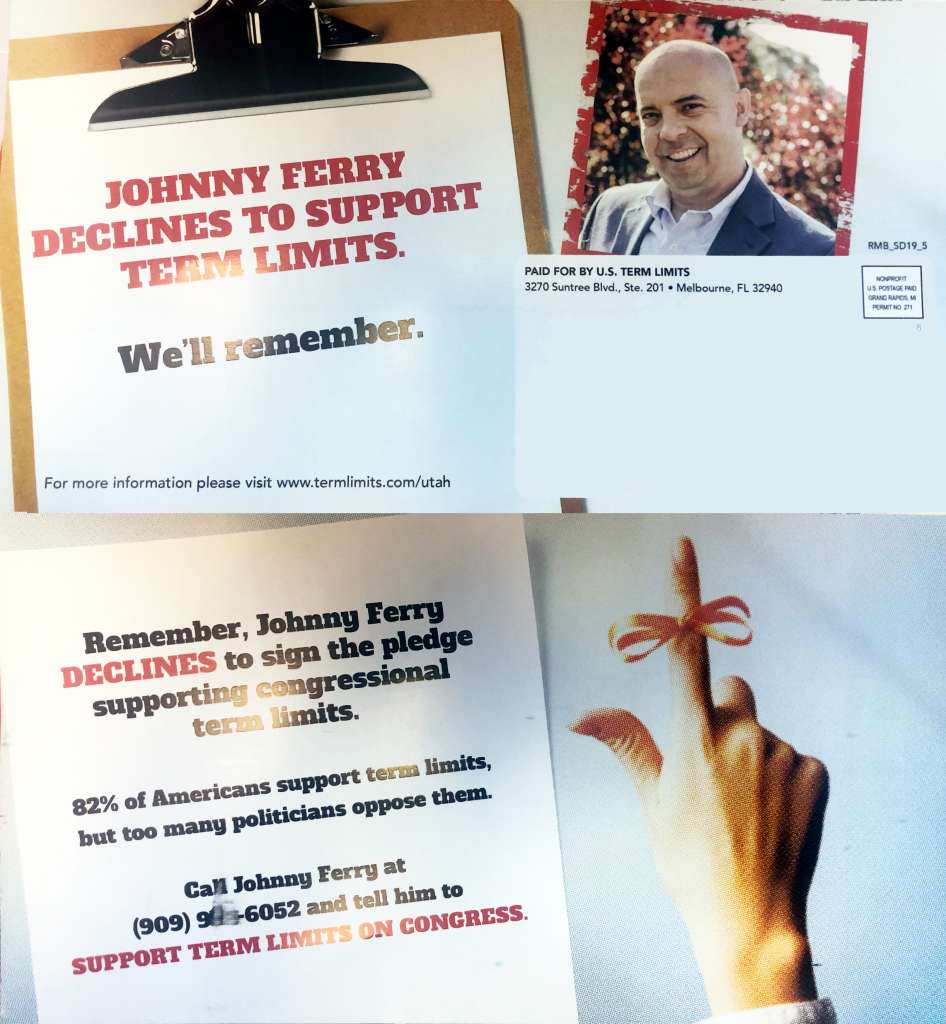 * NOTE THESE MAILERS WERE "PAID FOR BY U.S. TERM LIMITS"  WE HAVE NO CONTROL OVER WHAT THEY DO

This must be causing serious concern for Ferry’s campaign because a newly-created PAC called "Utah Term Limits" was formed on 6/19/2020 less than two weeks before the 2020 Primary Election.

If you click on the link entitled Statement of Organization you will discover that the Chief Financial Officer or Treasurer of the PAC is Spencer Stokes, one of the most well known campaign consultants in Utah as part of Election Hive. 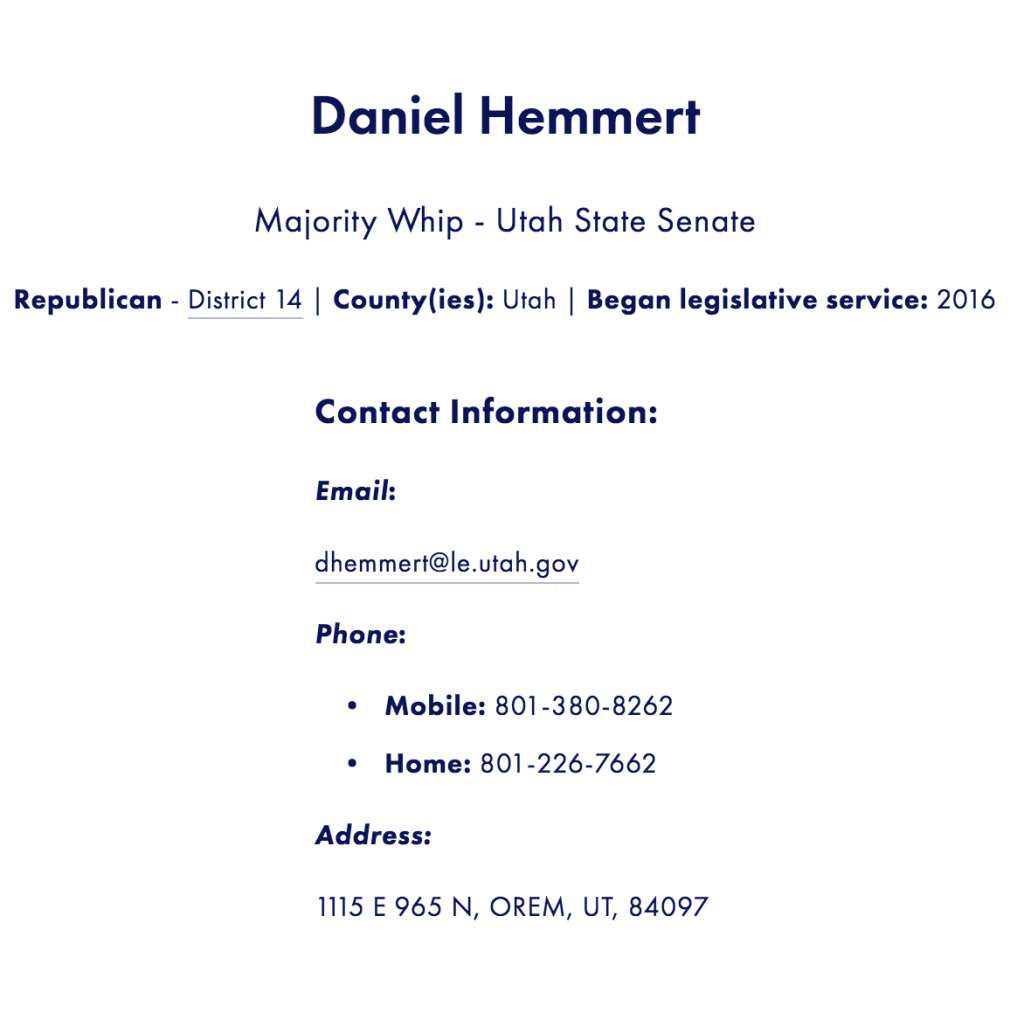 They have also created a single-page website, https://www.utahtermlimits.com/, that was created on 6/17/2020, less than two weeks before the Primary Election, which you can verify though Whois. 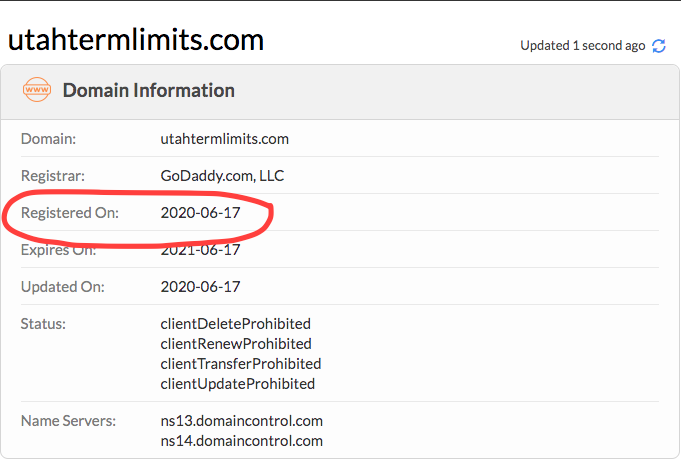 *** The PAC has now sent out a mailer supporting Johnny Ferry.***

WHO IS REALLY BEING DISHONEST?

On June 17th, the same day that the fake “Utah Term Limits” website was made, Johnny Ferry attacked John Johnson in a Facebook post, saying, “I ask you to consider the following: If my opponent is willing to put this kind of crap in an attempt to win this election, can you expert him to be honest as an elected leader? Not Cool.” Two days later, the same day the fake PAC was made, Ferry edited his Facebook post to remove that attack.   (If you check the history of the post you will see it as shown below) 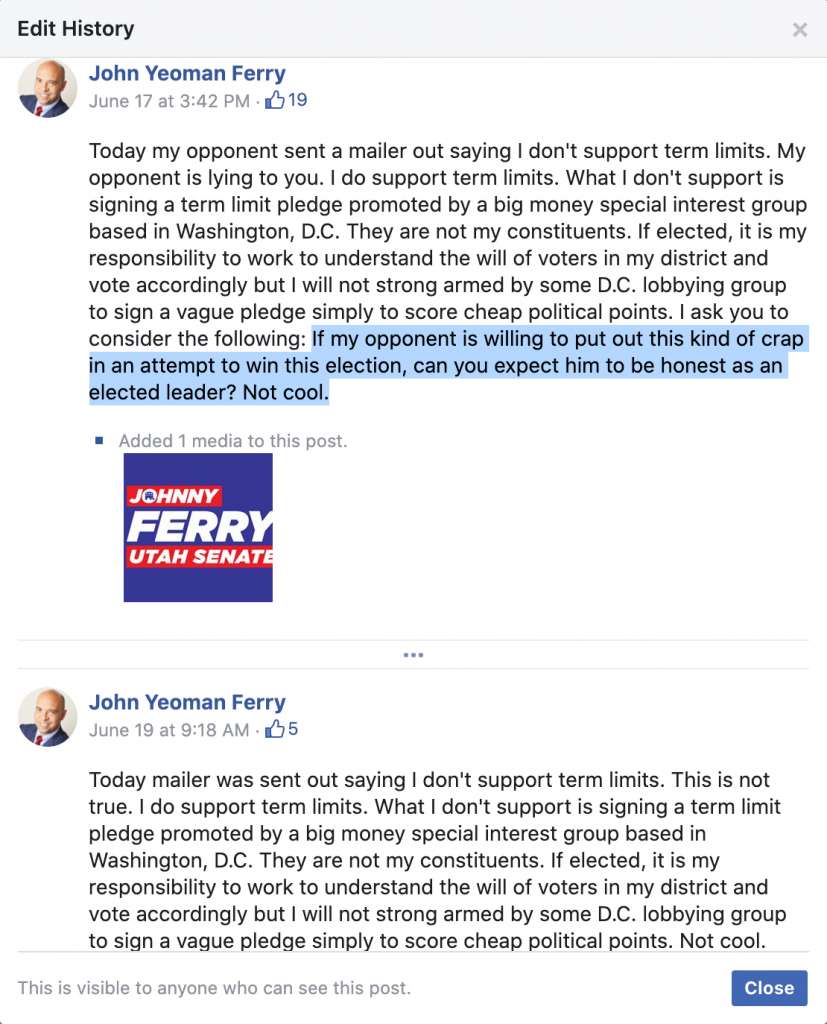 Ferry’s campaign then sent out an attack mailer saying “integrity and honesty matter.” He claims that John Johnson says “[he] didn’t support the tax referendum” which Johnson has never claimed, only that Ferry signed last minute. We invite Ferry to prove the date which he signed the referendum and disclose any efforts made to help the referendum succeed. 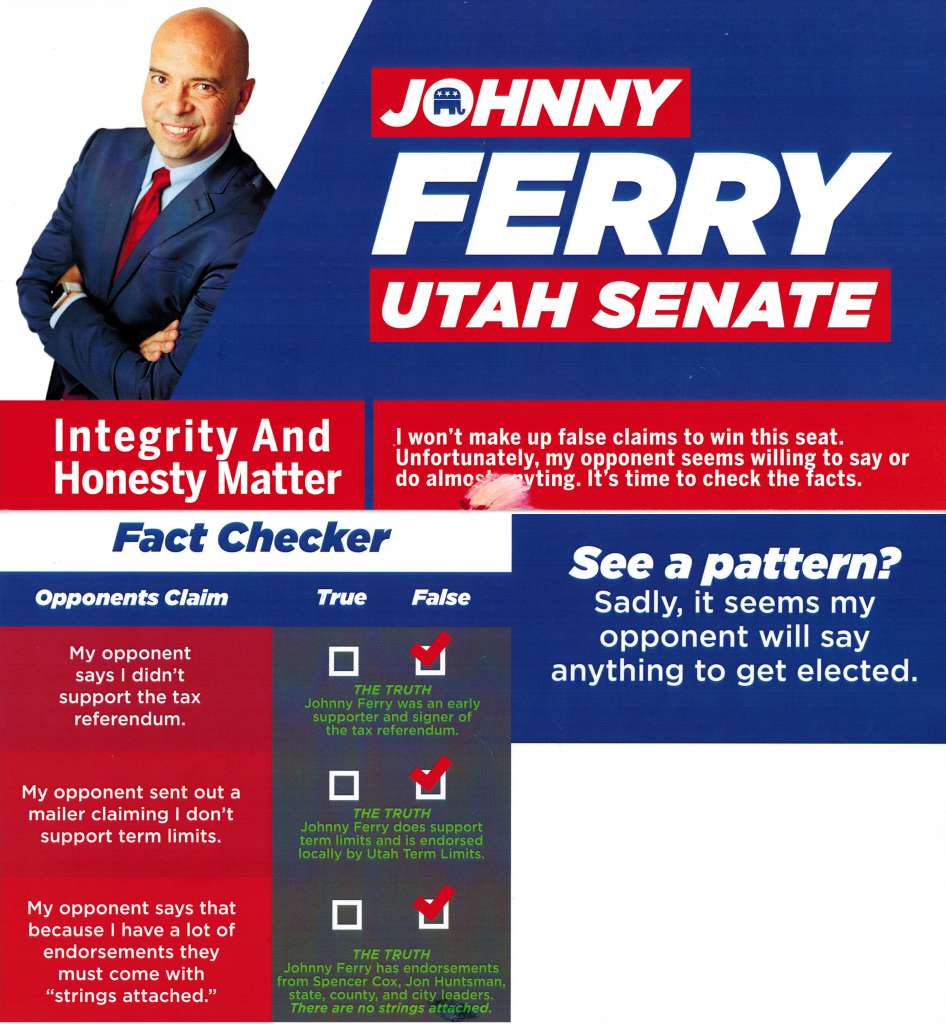 When confronted about signing the tax referendum day before the deadline (after the signature threshold had been met) during a public debate Ferry doesn’t deny it, only claiming that it “always has been part of [his] dialogue and on his mind.”

Then, Ferry fails to pledge to support U.S. Term Limits. When it becomes a campaign issue Ferry’s campaign makes up a fake Utah Term Limits PAC to start sending mailers out in support of his campaign claiming to support term limits.